New and Improved – with features that YOU requested!!! How often have you read that from some app’s ad only to buy it and wonder who would ever have requested these new “features”? And that’s only if you can guess which ones they are. Well in Band-in-a-Box for Mac 2021 PG Music shows you the requests and explains how they are integrated into the new version.  The page promises 59 but in fact the list includes 61, so work is obviously ongoing. You can see the list and also see and hear them in the video HERE. There are also 49 new features in the DAW plug-in! These guys have been hard at work during a very challenging year. Check out all of the new plug-in features HERE. 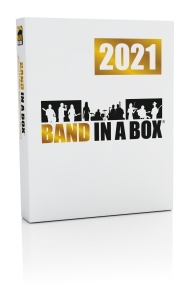 With all the brutal weather they have had to endure I was not really expecting PG Music to come out with a 2021 version of Band-in-a-Box but I’m glad I stayed in touch or I might have missed one of the BEST upgrades yet! You have some idea of the quantity of additions and changes, but the quality is stunning. I could never cover all of them in a blog post so I’ll whet your appetite with my own favourites and urge you to go to the web site to see all the new features!

My favourite addition, among many, are the 16 new Utility Tracks. There are so many uses for these it’s hard to know where to start: it’s like adding an additional 16-tracks to your existing studio recorder! You can use these for live recording, MIDI, Real Tracks, or even building up a track from existing BiaB music. With the BONUS 49 PAK you can even take single drums from those that used to be only available in ensembles, and build them into an entirely different style.

Audio harmonies can now be generated on individual tracks, which make the new Utility Tracks even more valuable. Adjust relative volumes, tweak effects, do whatever you like with each one.

All of these new tracks require an upgrade to the Mixer, which is now flexible enough to be resized to accommodate many different views such as only tracks that are playing, linked tracks, automatic show/hide during playback, any many more options. Also, the Mute and Solo states are saved with the song, saving time and smoothing your workflow.

The sound of Band-in-a-Box for Mac 2021 is terrific, with 24-bit audio recording, playback, generating, and rendering all available. And you can now mix in 32-bit float, which is higher precision than 24-bit, resulting in cleaner tracks with higher fidelity.

You can view audio wave forms on ANY track, not just the audio ones! This makes editing so much easier and precise.

Of course you are expecting more new Real Tracks, right? There are 202. Go to the web site to hear them in their own video.

You can fix “sour notes” within polyphonic generated tracks or ANY audio, from out-of-tune notes to those that don’t fit the chord. Clean up those unexpected “surprises”.

For guitarists, among the new effects is the “rotary”effect pioneered by The Beatles and Eric Clapton by plugging into the rotating horns of an electric organ (the Leslie effect). This is a classic sound instantly recognizable from the last 60’s. Also from the 60’s “coffeehouse scene” there are Real Tracks of dulcimer and other instruments that recall even more specific spots.

Jazz players now have better support for minor ii-V-I progressions, something that has been on a lot of wish lists for some time now. You can now workout in minor the same way you have been practising in major.

Add to all of this both 80’s and 90’s “Dublin rock” and 90’s grunge style and lots of GREAT new vocal tracks perfect for backing any singer and your musical palette has been greatly enlarged with classic styles as a basis for whatever you want to do with them.

For drummers the addition of Real Charts for ALL Real Drums is a HUGE addition. The charts are great for reading, but they are also playable as MIDI, meaning that you can cut and paste them into your own part and play them back through your own MIDI drum sets or send them to Real Drums.

I’ve only scratched the surface of the new capabilities, and biased towards making music. There are also studies from legends in their fields for you to learn things such as country guitar from the best in their fields. And many new instruments that can give a totally different sound to your arrangements such as pop vibes or jazz penny whistle or any other combination to make your sound stand out from the pack.

As amazing as the app itself is, there have been major changes to the plug-in that adds many of these new features to your DAW, to the point that they can become equal partners in your music making. With the plug-in, which comes with all versions of Band-in-a-Box, you can get many of these features into your DAW as an integral part of your workflow, rather than having to go out to a separate program and copy them in.

SUMMARY: 2021 is a big leap forward to the best Band-in-a-Box for Mac yet! I you have been putting off upgrading, or even if not, NOW is the time to upgrade! And if you haven’t got it yet, you owe it to yourself to get Band-in-a-Box 2021. Using a PC? Then check out Band-in-a-Box 2021 for Windows HERE.

Maybe the most important point from all the talk about this version is that PG Music is listening to you, their customers. So if you have a feature that you really want in the program, write to them or chat from their web site. Let them know and yours just might be the next feature added.

DON’T MISS THIS VERSION OF BAND-IN-A-BOX!